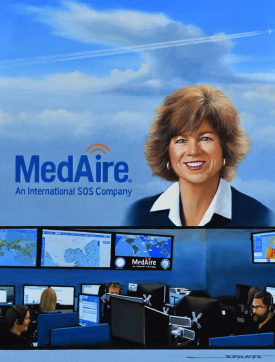 In 1983, while serving as chief medical officer onboard an emergency medical helicopter, Joan Sullivan Garrett, a registered nurse, and founder of a paramedic training program, responded to an accident on a remote Arizona road. Two years later, Garrett launched MedAire, with the vision of ensuring quality care for people in remote environments – air, land and sea – by providing environment-specific medical training, medical resources (such as first aid kits and comprehensive medical kits) and real-time access to medical expertise. In parallel, Garrett began building MedLink, a 24-hours-a-day, 365-days-a-year hotline to the highest levels of medical expertise. It ushered in the era of telemedicine for not only the aviation industry but one of the first commercially viable telemedicine services in the world. In 2008, MedAire became a part of International SOS, the world’s leading travel assistance company. This enabled MedAire to expand its services to include security and provide comprehensive travel risk management solutions to more than 2,000 companies throughout the world. Today, MedAire’s MedLink service takes an average of 16,000 calls a month, as the company boards hundreds of thousands of first aid and medical kits a year and holds thousands of training classes. Most importantly, since the company’s founding, it has touched the lives of more than a million people. Garrett has been recognized for her entrepreneurial drive, innovation and impact on an entire industry by the Flight Safety Foundation’s Business Aviation Meritorious Service Award; Ernst & Young Entrepreneur of the Year for Arizona; Spirit of Enterprise Award, Arizona State University; National Business Aviation Association Meritorious Award Winner; and International Aviation Women’s Association Aviation Industry Woman of Excellence Award.
Inducted in 2019.
Portrait Location: Not Currently on Floor