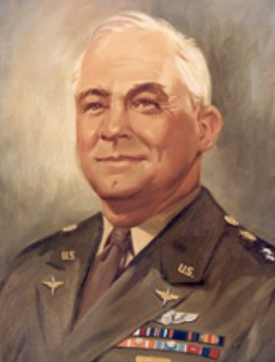 Henry Harley Arnold graduated from the United States Military Academy in 1907. From the occasion of his first airplane flight as a passenger in 1910, his life paralleled the development of American air power. He was awarded his aviator brevet in July 1911, having received his instruction from the Wright brothers. In 1912, after establishing a new altitude record of 6,540 feet, he was awarded the first Mackay trophy and was the first military aviator to report his observations by radio. He established the first United States Army flying school at San Diego in 1916. Charged with organization and planning tasks in Washington, D.C., he played a major role in fielding the United States Air Service in World War I. An early proponent of strategic air power and an independent air arm, he strongly advocated and publicly supported the views of General Billy Mitchell. In demonstration of his thesis, Arnold personally organized and led the 1934 mass flight of bombers from Washington to Alaska, for which he was awarded his second Mackay trophy. Through his encouragement, the famed B-17 Flying Fortress and B-24 Liberator bombers were developed. These aircraft played a decisive role in World War II. Under his command, the AAF grew from a force of 26,000 men and fewer than 800 aircraft in 1939, to a global Air Force of two and a half million airmen and 80,000 aircraft in 1945. Characteristically, while the war was at its peak, General "Hap" Arnold was looking toward the future. He was planning a post-war Air Force of highly skilled and dedicated professional airmen whose strength would guarantee the defense of America. His long struggle to promote air power came to fruition with the establishment of an independent United States Air Force in 1947. He left an air shield of defense second to none as a legacy to his country.
Inducted in 1972.
Portrait Location: Not Currently on Floor