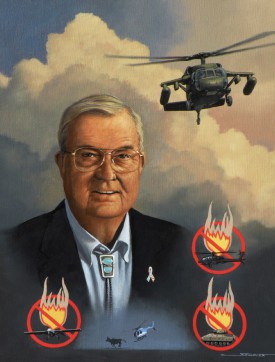 Born October 2, 1934 in Phoenix, Arizona. Harry Robertson graduated from Embry-Riddle School of Aviation before joining the U.S. Air Force and entering pilot training. His love of flight led him to participate as an examiner in military aviation accidents and particularly in post-crash fires. Robertson theorized that he could design and develop a fuel system that would survive upon impact, thus saving the lives of many people who might otherwise perish. In the 1960s, Robertson formed Robertson Research Engineers and for seven years, he and his team members conducted and analyzed crash-test results on over 40 full-scale aircraft. They flung, swung, and dropped 40 full sized aircraft and hundreds of newly designed crash-worthy fuel systems in order to understand and solve the problem of crash impact on aircraft fuel tanks. On the strength of a large order from Hughes Helicopters in 1974, Robertson Aviation was established in Tempe, Arizona that same year. The newly formed company produced the "Crashworthy Robertson Fuel Systems," nicknamed "Robbie Tanks" by the military, for use in civilian and military aircraft. Robertson is known to say, "There's no reason for someone to survive a crash -- and then die in a fire." A 1991 U. S. Army proclamation stated that the crashworthy fuel system pioneered by Robertson was directly responsible for saving over 8,000 lives since 1970. Over the years Robertson earned numerous honors and awards for his pioneering efforts: From Embry-Riddle Aeronautical, an Honorary Doctorate in Aviation Technology; induction into the National Aviation Hall of Fame and Army Aviation Hall of Fame; the OX-5 Aviation Pioneers Hall of Fame; elected to the Embry-Riddle Board of Trustees in 1991; received the Jerome Lederer International award for accident investigation. Robertson's career reflects a lifetime of dedication to aviation safety and service to his fellow airmen. Robertson passed away in October 2021 at the age of 87.
Inducted in 2012.
Portrait Location: Hall of Fame Hallway