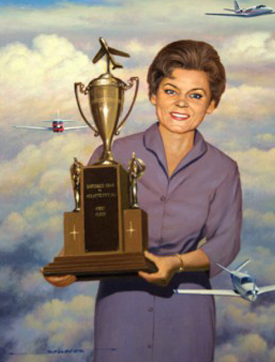 Fran Bera started flying in December of 1940 at Grand Rapids Michigan while she was in high school-skipping school to take lessons. Inspired by a dollar plane ride at the local fairgrounds, she saved her school lunch money to pay for these lessons. By the age of 16, she had flown her first solo flight and soon after earned her commercial license and flight instructor rating. During World War II, Fran qualified as a free fall parachutist, and after the war she ferried surplus-aircraft around the country. She became one of the first women FAA Pilot Examiners at the then minimum age of 24. She was a Pilot Examiner for private, commercial, multi-engine and instrument ratings for more than 25 years, certifying more than 3,000 pilots. As an experimental test pilot for Lift Systems, Inc., Bera was the first woman to fly a helicopter with no tail rotor. She also was one of 25 women invited to participate in a week-long testing program of potential women astronauts at the Lovelace Clinic in Albuquerque, New Mexico. Bera is a seven-time winner of the All Woman Transcontinental Air Race (Powder Puff Derby), won the Palm to Pines All Women's Air Race in 1997, 1998, 2000, 2003, 2004, and 2005, and has placed in other speed races, including the Reno Air Races and the International Air Race. For 31 years, she has held the world altitude record for class C-l-d aircraft, established in June 1966 in Long Beach, California, in a Piper Apache. An active member of The 99s, Fran also is a member of Whirly Girls, Silver Wings, and AOPA. She served three years on the Women's Advisory Committee on Aviation, organized by the FAA in Washington, DC. In the 1960s, she served on Governor Ronald Reagan's Aviation Education Task Force in California. Bera's latest goal is to be a member of the Flying Octogenarian Club. She has invested in real estate, which helps support her hobby. She flies to Mexico for pleasure, to Texas on business, and many other places just because they sound like fun. Bera passed away in San Diego on February 10, 2018. She was 94.
Inducted in 2007.
Portrait Location: Hall of Fame Hallway