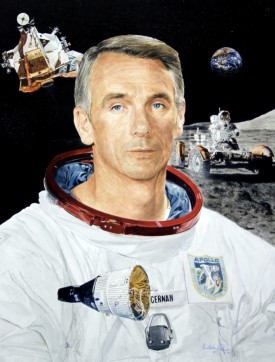 Eugene Cernan's excitement about aviation began as a young boy watching newsreels of World War II fighter pilots. He marveled at their skill, daring, and willingness to accept risk in defense of our country. In college, Gene joined the Purdue University ROTC program, and earned his Electrical Engineering degree. After graduation, he entered Navy flight training and earned his 'wings of gold' serving as a fighter pilot in attack squadrons 26 and 112 at Miramar Air Station in San Diego, CA. He later received his masters in Aeronautical Engineering at the Navy's Postgraduate School in Monterey. Gene flew in space three times, and is credited with setting the stage for Neil Armstrong's Apollo 11 moon walk. Through his extraordinary piloting and flight test of the Apollo 10 lunar module, he confirmed the performance, stability and reliability of the module configuration and its separation and descent capabilities, as he flew it to within 9 miles of the lunar surface. His preparation for the first moon landing clearly demonstrated man could navigate safely and accurately in the moon's gravitational fields. Cernan, commander of Apollo 17, became the last man to walk on the moon in December 1972 when he landed at Taurus-Littrow aboard the Challenger lunar module. Cernan, and Challenger lunar module pilot Jack Schmitt, spent three days roving around the lunar surface. Apollo 17 set numerous records, including longest lunar landing flight, longest lunar surface extravehicular activities, largest and heaviest amount of lunar surface samples collected, and longest time in lunar orbit. Gene has logged more than 5,000 hours flying time and over 200 jet aircraft carrier landings; claiming publicly that his night aircraft carrier landings were his greatest flying challenge and helped prepare him for the equally disciplined and exacting moon landings. He has logged 566 hours and 15 minutes in space, and 73 hours on the surface of the moon. A fellow of the American Astronautical Society and member of the Society of Experimental Test Pilots, Gene's awards include two NASA Distinguished Service Medals, the NASA Exceptional Service Medal, the JSC Superior Achievement Award, and the Distinguished Flying Cross. Cernan passed away on Jan. 16, 2017.
Inducted in 2007.
Portrait Location: Space Gallery