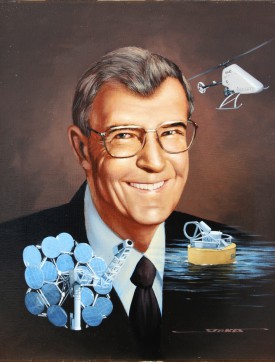 Dr. John Robert Beyster is the founder of Science Applications International Corporation, where the employees have a vested stake in the company's success. Dr. Beyster, born in Detroit, Michigan, in 1924, enlisted in the Navy during World War II and enrolled in the V12 Officer Training Program at University of Michigan. He eventually served on a destroyer based in Norfolk, Virginia. After receiving his PhD, he worked as a research physicist at the Los Alamos National Laboratory. In 1957 he became the chairman of the Accelerator Physics Department of General Atomics in San Diego. In 1969 he started Science Applications Incorporated (later changed to SAIC) which would soon become the largest employee-owned research and engineering company in the United States. Dr. Beyster designed SAIC so that ownership of the company and profits belonged to the company's employees. This shared ownership was accompanied by shared responsibility and freedom in business development. SAIC became a leading provider of aerospace, scientific, engineering, systems integration and technical services and solutions, including sophisticated tactical decision aids for fighters, bombers, transport, and rotary wing aircraft. Dr. Beyster retired from SAIC in 2004. Dr. Beyster received the prestigious Horatio Alger Award in 2008.
Inducted in 2008.
Portrait Location: Not Currently on Floor