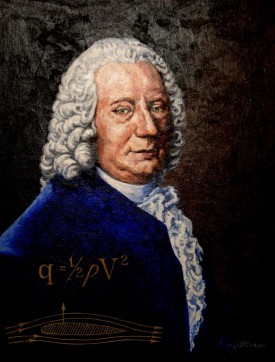 Swiss physicist Daniel Bemoulli studied medicine while learning calculus from his father. His doctoral dissertation on the mechanics of breathing took the unique approach of applying mathematical principles to medicine. After studying philosophy, logic, and medicine at the universities of Heidelberg, Strasbourg, and Basel, he received an MD degree in 1721. In 1723 and 1724 he wrote "Exercitationes Quaedam Mathematicae" on differential equations and the physics of flowing water, winning a position at the influential Academy of Sciences in St. Petersburg, Russia. Bernoulli lectured there until 1732 while researching the properties of vibrating and rotating bodies and contributing to probability theory. His "Hydrodynamica," published in 1738, established the Bernoulli Principle, which states that as the velocity of a fluid increases, its static pressure decreases. This principle of fluid mechanics explains how airflow over the curved upper surface of airplane wings and helicopter rotors causes a pressure differential that generates lift. Without the understanding and application of Bernoulli's Principle, practical aircraft design would have never been attainable. Bernoulli also established the basis for the kinetic theory of gases and heat by demonstrating that the impact of molecules on a surface would explain pressure and, assuming the constant, random motion of molecules, pressure and motion increase with temperature. Bernoulli's prizewinning papers reflected his success on the research frontiers of science and his ability to clearly identify and explain the scientific problems of the day.
Inducted in 2002.
Portrait Location: Hall of Fame Hallway