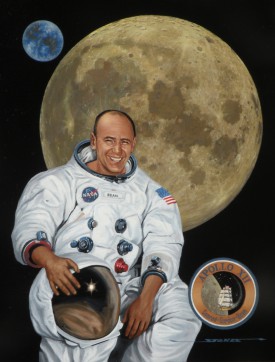 Alan L. Bean, astronaut, test pilot, engineer and painter was the fourth of only 12 men to walk on the moon. He made his first fight into space aboard Apollo 12, the second manned mission to land on the moon. His second and final flight into space was in 1973, as Skylab 3 spacecraft commander, the second manned mission to the Skylab space station. Born in Wheeler, Texas, he attended the University of Texas, earning an aeronautical engineering degree in 1955. As a Navy fighter and test pilot, Captain Bean flew 27 different aircraft, accumulating 7,145 hours. Bean joined NASA in October 1963, and was selected as a part of Astronaut Group 3, participating in Mercury follow-on space programs. His initial assignments were as part of the back-up crews for Gemini 10 and Apollo 9. Bean was selected as lunar module pilot for the 1969 Apollo 12 lunar landing mission. During this mission, he explored the Moon surface during two moonwalks, lasting nearly six and a half hours. He also flew in space as commander of Skylab II in 1973, orbiting the Earth aboard America's first space station for a record 59 days, a 24,400,000 mile mission. He was in space for 1,671 hours and 45 minutes, testing many of the concepts employed today by International Space Station astronauts. Captain Bean retired from the Navy in 1975, continuing to work for NASA as head of the Astronaut Candidate Operations and Training Group. He earned many honors and awards during his career, including two NASA Distinguished Service medals in 1981. That same year, he retired from NASA to devote his time to painting. Bean retired to Houston, Texas, spending as much time as possible in his studio painting dramatic moonscapes that no camera could capture. Bean passed away in Houston on May 26, 1918 at the age of 86.
Inducted in 2010.
Portrait Location: Space Gallery