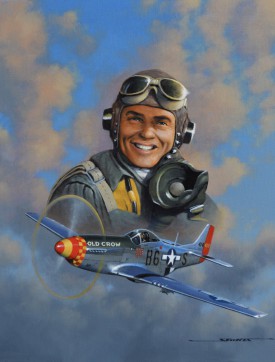 Bud Anderson is a World War II Triple Ace, who flew the P-51 Mustang Old Crow while assigned to the 357th Fighter Group "Yoxford Boys," 8th Air Force Group - the first group to be equipped with the Mustang. At the young age of 22, Anderson flew two tours of combat against the Luftwaffe in Europe while with the 363rd Fighter Squadron and achieved 16 victories through 116 missions without a single hit from enemy aircraft. With over 30 years of service, Colonel Anderson has been decorated 25 times, including five Distinguished Flying Crosses, the Bronze Star, and two Legion of Merits. He is a life member of the American Fighter Aces Association and a Fellow of the Society of Experimental Test Pilots. In 2008, he was inducted into the National Aviation Hall of Fame.
Inducted in 2013.
Portrait Location: Hall of Fame Hallway