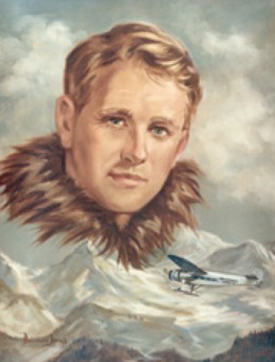 Bernt Balchen received his aviator's wings in 1921 and was commissioned a Flight Lieutenant in the Royal Norwegian Naval Air Service. While a pilot-engineer in Spitsbergen, Norway in 1925, he acquired his first experience in polar flying as commander of aerial missions for explorers Amundsen and Ellsworth. Upon immigration to the United States in 1926 he became a pilot of the famed Byrd team and chief test pilot for Fokker Aircraft Corporation. Balchen was the hero of Byrd's 1927 transatlantic flight in the Fokker trimotor monoplane America when forced to circle fog-bound Paris for three hours with fuel tanks nearly empty. He then flew back to the coast and successfully ditched the plane in the Atlantic, thereby saving all on board. From 1928 to 1930 he served as chief pilot of the Byrd Antarctic Expedition, piloting the first flight from the Bay of Whales to the South Pole and back on November 29th 1929. When Germany invaded Norway at the beginning of World War II, Balchen joined the British Royal Air Force ferrying bombers to England. Transferred to the U.S. Army Air Corps in 1941, he spent the next two years building air bases in Greenland so that aircraft being ferried from the United States to Great Britain would have a place to refuel. He established a covert air transportation system between England, the Scandinavian countries, and Russia. His diplomacy and persuasion secured the necessary international agreements, and he became its able and dedicated leader. Not one aircraft was lost to enemy action, and the number of evacuees exceeded 4,300 persons. Returning to civilian life in 1946, he assumed a major role in the development of the Scandinavian Airlines system. Recalled to active duty in 1948, Balchen took command of the U.S. Air Force rescue operations in Alaska, and in 1949 piloted the first flight from Alaska across the North Pole to Norway. He thus became the first to pilot an aircraft over both the North and South Poles.
Inducted in 1976.
Portrait Location: Near R-44 and B-5 Brougham