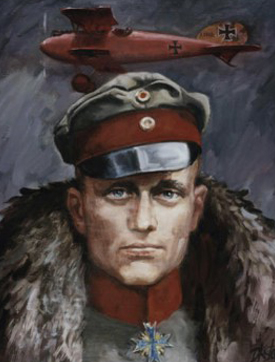 After completion of cadet training in 1911, Manfred Albrecht von Richthofen joined the Uhlan Regiment No.1 - Kaiser Alexander, as a cavalryman. At the outbreak of war he entered the aviation corps in January 1915 and was trained as an aircraft observer. A chance meeting with the great air fighter Oswald Boelcke inspired him to become a pilot himself. After receiving his pilot's badge, Boelcke selected Richthofen to join his elite JASTA II. His first victory occurred over Cambrai, France on September 17th 1916. Following his 16th victory he was elevated to command of JASTA II and 2 days later received the much coveted Pour le Merite Medal, the "Blue Max." Promotion and victories came in rapid succession. Under his leadership, the squadron became the scourge of the skies over the Western Front. At that time all the squadron's aircraft tails were painted red, with individual distinguishing markings, but the Baron's machine was all red. The scheme led to the informal but apt title "Richthofen's Circus" being given to the squadron. By mid-1917 his unit was expanded to Fighter Wing One, comprised of four squadrons commanded by the cream of the pilots Richtofen had trained in JASTA II. The unit grew fourfold under his command and became the most formidable fighter wing on the entire Front. Having achieved 80 confirmed victories in all manner of combat, it is ironic that he himself should be shot down by an Australian anti-aircraft battery on April 21st 1918, while pursuing a fledgling British pilot near St. Quentin. The British Royal Flying Corps rendered full military honors at the burial of the leading ace of World War I.
Inducted in 1968.
Portrait Location: World War I Gallery