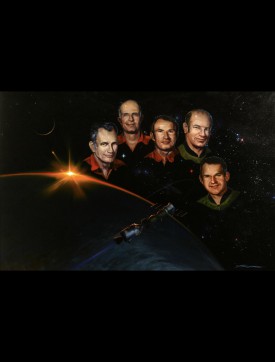 An international space mission was flown in July 1975 that many believed impossible, given the technological, political, and ideological differences between the two countries involved. For the first time, the United States and the Soviet Union cooperated in a venture that resulted in their spacecraft joining to become a single space vehicle in orbit. For this unique mission, the two nations relied on proven space vehicles, the Soviet Soyuz and the American Apollo. For the two spacecraft to fit together, a special docking module was designed to provide a passageway between these two vehicles. The mission began on July 15th 1975, with flawless launches at the Baikonur Cosmodrome and at the Kennedy Space Center. Two days later, the two spacecraft docked 222 kilometers above the earth and remained together for two days. The Soyuz crew (Valeriy N. Kubasov, and Alexei A. Leonov) returned to Earth on July 21st and the Americans (Vance D. Brand, Donald K. Slayton, and Thomas P. Stafford) splashed down in the Pacific on the 24th. The astronauts and cosmonauts of the Apollo-Soyuz Test Project proved that two greatly diverse nations could cooperate in space flight research, accomplish possible rescue missions in space, and take the essential first step toward today’s multinational space station.
Inducted in 2001.
Portrait Location: Not Currently on Floor