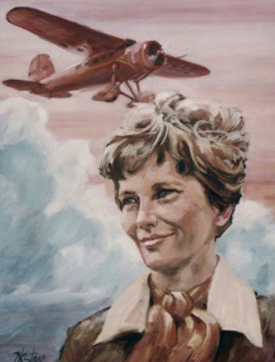 As a nurse's aide in Toronto in 1918, Amelia Earhart became fascinated by flight while watching aerial exhibitions. She earned her wings in Los Angeles in 1925, and in 1928 was asked to fly across the Atlantic as a passenger, the first woman to do so. She again came into the limelight on November 22nd 1929 when she established a speed record for women of 184 miles per hour in a Lockheed Vega. The next year she established two more speed records. On April 8th 1931 she piloted an Autogyro to a height record of 18,415 feet. With all these accomplishments, she still wanted to fly the Atlantic as her own pilot. Just 5 years to the day after Lindbergh's triumph, in May 1932, she accomplished this goal in a red and gold Lockheed Vega. In 1933 she set a new transcontinental record for women, flying from Los Angeles to Newark in 17 hours 15 minutes. On January 12th 1935, she flew from Hawaii to California, becoming the first woman to fly this stretch of the Pacific. On May 8th she flew nonstop from Mexico City to Newark, New Jersey, in 14 hours 18½ minutes. She was the first person to fly this route from south to north, and the only woman to do so. Her greatest challenge came in 1937, when she planned an equatorial flight around the world. While many earlier world routes had merely traversed the middle of the Northern Hemisphere, Earhart's route measured over 25,000 miles. The airplane she chose was a twin-engined Lockheed Electra. She flew the first leg from Oakland to Honolulu on March 17th, without incident. During her attempt to take off on March 20th a tire blew, badly damaging the aircraft. Two months later, she set out again, this time heading eastward, crossing the U.S., Venezuela, Brazil, the South Atlantic, the African desert, and the Arabian Sea. She then flew on to Calcutta, Bangkok, Singapore, Australia, and Goa. From there her next destination was Howland Island, over 2,500 miles away. On July 3rd 1937 she disappeared somewhere en route to the island, along with her navigator Fred Noonan. No trace of the airplane has ever been found to solve this mysterious disappearance.
Inducted in 1967.
Portrait Location: Hall of Fame Hallway