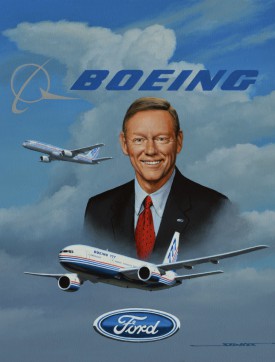 Mulally joined The Boeing Company in 1969. He held a number of engineering and program management positions, contributing to the 727, 737, 747, 757, 767 and 777 projects. He served as director of engineering, then vice president of engineering for the commercial airplane group. In 1994, Mulally was named senior vice president, and, in 1997, became president of Information, Space & Defense Systems. In 1998 he was named president of Boeing Commercial Airplanes; CEO duties were added in 2001. Mulally was honored with the 1986 American Institute of Aeronautics and Astronautics (AIAA) Technical Management Award and received Aviation Week & Space Technology "Laurels" recognition. In 1994, he received the University of Kansas Distinguished Engineering Service award and was elected a fellow of the Royal Aeronautical Society. Aviation Week & Space Technology named Mulally person of the year for 2006. That same year Mulally joined the Ford Motor Company as CEO and returned the company to profitability, the only American major car manufacturer to avoid the "bailout" provided by the federal government. As CEO, he implemented his "One Ford" plan and successfully transformed Ford back into the number one automobile brand in the nation. He left Ford in 2014. He served as past president of the AIAA as well as president of its Foundation. He also served as chairman of the Board of Governors of the Aerospace Industries Association. In 2015, he was awarded the AIAA David Guggenheim Medal for his vision, direction and commitment to Boeing and "the creation of six of the world's most well-known airliners."
Inducted in 2015.
Portrait Location: Near R-44 and B-5 Brougham