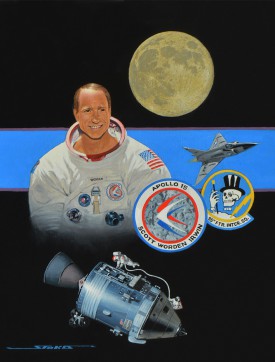 As Command Module Pilot for Apollo 15, the first extended scientific exploration of the Moon, Al Worden spent six days in orbit, with three of those days alone, the most isolated person in existence. During his return to Earth, Worden also conducted the first spacewalk in deep space, becoming the first human to see both the entire Earth and Moon simply by turning his head. Worden’s Apollo 15 flight capped an already-impressive career as an astronaut, including important work on the pioneering Apollo 9 and Apollo 12 missions, as well as the perilous flight of Apollo 13. Worden attended the Military Academy at West Point, graduating in 1955, at graduation choosing to join the Air Force. Worden also received a University of Michigan master’s degree in astronautical/aeronautical engineering in 1963 and an honorary doctorate in astronautical engineering in 1971. In 1965, he graduated from the Empire Test Pilot School in England, and was an instructor at the Aerospace Research Pilots School at Edwards Air Force Base. During his solo time around the Moon, Worden mapped the lunar surface extensively, using an array of special cameras, as well as conducting other science experiments. Returning to Earth, Worden carried out the first deep space EVA, for which he still holds a record as being the farthest from Earth. Worden spent 38 minutes outside the Command Module, retrieving film cassettes from the panoramic and mapping cameras. Worden was Senior Aerospace Scientist at the NASA’s Ames Research Center from 1972 to 1973, and was chief of the Systems Study Division at Ames from 1973 to 1975. He received the NASA Distinguished Service Medal in 1971, and was inducted into the International Space Hall of Fame and U.S. Astronaut Hall of Fame in 1983 and 1997, respectively. Worden passed away at the age of 88 on March 17, 2020.
Inducted in 2016.
Portrait Location: Space Gallery