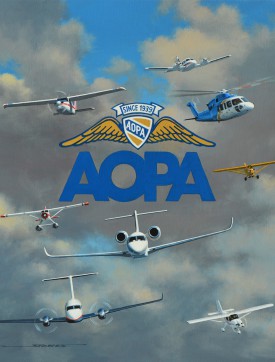 The Aircraft Owners and Pilots Association (AOPA), has been protecting the freedom to fly for over 75 years. The organization started small, but today has 400,000 members, striving to make aviation safe, fun and affordable. Initiative, teamwork, service, integrity and excellence are the simple but important values that the AOPA represents. They have the several missions of advocating on behalf of members, educating pilots, ensuring the long-term health of general aviation, and securing sufficient resources to ensure success. The AOPA had its beginnings in 1932 when the Philadelphia Aviation County Club was founded at Wings Field in Pennsylvania. The AOPA formally incorporated on May 15, 1939, with J.B. “Doc” Hartranft as the first Executive Director. The organization was effective from the start, successfully advancing a Senate bill that would establish the Civilian Pilot Training Program that would train thousands of pilots. In their first year, the AOPA also worked towards construction of more airports, lower aviation insurance rates and more affordable aircraft. By the end of its first year, AOPA had over 2,000 members. The organization grew beyond American borders, creating the International Council of Aircraft Owners and Pilots Association in 1962. The first international members were from Canada, Australia and South Africa. By the end of that decade, AOPA membership had grown to almost 300,000. Later, increased restrictions and airport closings were a consistent theme, and the organization was needed more than ever. Today, the AOPA continues to protect and expand interest in general aviation for the private pilot. It is not an understatement to say that general aviation in the United States and indeed the world, owes its enormous growth and sustained success to the AOPA.
Inducted in 2016.
Portrait Location: Near R-44 and B-5 Brougham