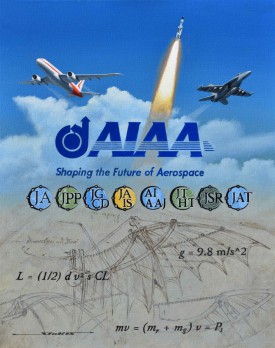 The American Institute of Aeronautics and Astronautics (AIAA) is a professional society for the field of aerospace engineering. Formed in 1963 through the merger of the two great aerospace engineering societies of the day, the American Rocket Society (ARS) and the Institute of the Aeronautical Sciences, (IAS), both established in 1932, the American Institute of Aeronautics and Astronautics (AIAA) is the nation’s preeminent, and the world’s largest technical organization representing the aerospace community. Headquartered in Reston, Virginia, the AIAA’s formal mission is to inspire and advance the future of aerospace for the benefit of humanity. AIAA is the U.S. representative of the International Astronautical Federation and the International Council of the Aeronautical Sciences, and numbers more than 30,000 members in 64 sections. It houses vast archives of technical reports, periodicals, manuals, and manuscripts and, while in its infancy, published the AIAA Journal, The Journal of Aircraft, and the Journal of Spacecraft and Rockets. Today there are seven specialized publications produced by the organization. The AIAA Journal became “Astronautics and Aeronautics in 1964 and later, “Aerospace America.” For over 80 years, AIAA has taken great pride in its many achievements, and those of its members, and looks forward to continuing its support of the aerospace industry into the future.
Inducted in 2017.
Portrait Location: Near R-44 and B-5 Brougham