San Diego’s Ford building was constructed in 1935 for the California Pacific International Exposition and housed the Ford Motor Company’s industrial and automotive display. Henry Ford invested $2 million to build a showcase for Ford Motor Company’s 1935 line and the V-8 engine. The building was designed by the noted industrial designer Walter Dorwin Teague and was a masterpiece of “Streamline Moderne” architecture. One of the major highlights of the exposition was the Ford “Roads of the Pacific.” Visitors could take a tour around different Pacific roads in a new Ford V-8 model.

The Ford exhibit closed in 1936 and the building was renamed the Palace of Transportation. While not as successful as the Ford exhibit, it still remained a popular attraction in 1936. 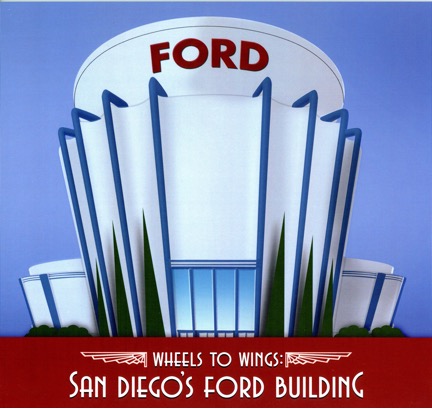 The San Diego Aerospace Museum, now known as the San Diego Air & Space Museum (SDASM) opened on February 13, 1963 in Balboa Park’s Food & Beverage Building. It quickly ran out of space and in June of 1965 it moved into the Electric Building. With the growing collection of airplanes and memorabilia in the Museum and its Library and Archives, the building became overcrowded and SDASM again needed to move. While plans were underway, on February 22, 1978, the Electric Building burned to the ground by an arson-caused fire. The Museum staff moved into the basement of the Ford Building. The building was completely renovated and, on June 28, 1980, it opened its doors as the San Diego Aerospace Museum, exhibiting a growing number of donated and newly acquired artifacts.

San Diego’s Ford building was one of five buildings designed for the Ford Motor Company to be used as exposition halls during the 1930s. San Diego is the only Ford building still in existence. The building is registered on the San Diego City Historical Site Register and the National Register of Historic Places.