Theodore Parsons “Ted” Hall, noted designer of the Consolidated flying automobile, was born in Wallingford, Connecticut, December 18, 1898. He joined Consolidated Aircraft Corporation in Buffalo, New York in 1931 as a structural engineer, quickly advancing to senior-level project engineering assignments. He came to San Diego when Reuben Fleet relocated Consolidated in 1935. He was involved in the development of many of the Consolidated, later Consolidated-Vultee Aircraft models, including the PBY (Catalina), B-24 and C-87 (Liberator), PB2Y-3 (Coronado), the B-32 (Dominator), and also received a patent for what eventually became the XC-99. His involvement with Catalina design and development was particularly significant.

Ted Hall first attracted national attention when he was at Cunningham-Hall, involved in the design of aircraft which minimized landing speed through the innovative use of high lift devices, a feature more commonplace today. It was with this advanced development background that Mr. Hall was able to bring to reality a convertible car-airplane, more commonly called the flying automobile. Many had tried to perfect the concept, but Mr. Hall was the first to introduce a successful design. He began his convertible car-airplane program in 1938, and began construction of the prototype the following year, all accomplished on “his own time,” still a Consolidated employee. The development vehicle was successfully test flown in 1940 at the Linda Vista Airport. 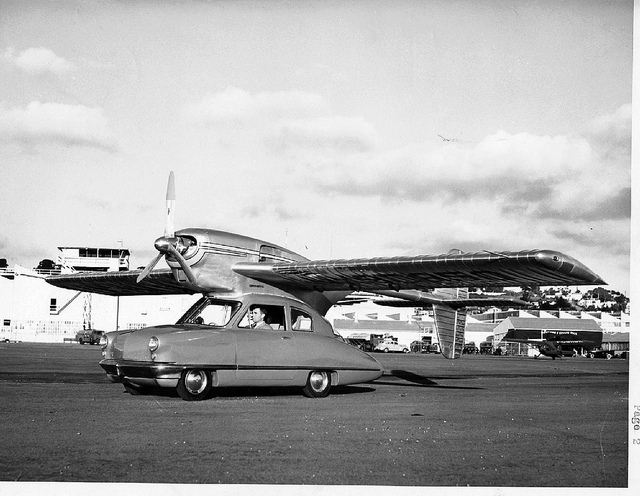 In 1946, Hall sold rights to his flying car program to Southern Aircraft Corporation for further development. Southern Aircraft, however, after several months, returned all rights to Mr. Hall. He left Consolidated employment to continue development of his flying car, and was able to secure the company’s development backing in 1946. In 1948, after a considerable expenditure, Consolidated abandoned the project, transferring all rights of manufacture and the prototype back to Mr. Hall, in accordance with their agreement.

He formed Airways Motors, Inc., as well as T.P. Hall Engineering Corporation in San Diego, but a lack of funding eventually doomed continuation of his flying car program. Three vehicles had been developed, and all were successfully flown, the last in 1948. There were approximately 140 flights during the program. Mr. Hall’s prototype was displayed at San Diego Air & Space Museum until destroyed by fire in 1978. Hall’s two remaining roadable airplanes were stored at Camp Elliott in the San Diego area, but were destroyed by vandals.