Philip Bono was a renowned space engineer who was probably 30 years before his time. He was born in Brooklyn, New York on January 13, 1921. He graduated from the University of Southern California in 1947 with a B.E. degree in mechanical engineering, and served three years in the U.S. Naval Reserves.

After graduation in 1947, Mr. Bono worked as a research and systems analyst for North American Aviation. His first "tour" with Douglas Aircraft Company was from 1949 to 1951, doing structural layout and detail design. From 1951 to 1960, he worked primarily in structures design at Boeing. Between 1947 and 1949, he worked at Northrop Aircraft R&D. From 1984-1986, he was general manager of Cal-Pro Engineering Consultants doing structures integration and subsystems stress analysis. From 1966 to 1988, he again worked at Douglas Aircraft after Douglas' merger with McDonnell Aircraft where he did the majority of his advanced space design work.

Although his visionary designs were never actually built, his contributions pioneered the advancement of the Space Shuttle, a vertical take off horizontal landing version of the SSTO spacecraft.

From his ROOST design onwards, Bono advocated space launch vehicles without wings, usually using rocket-assisted vertical takeoff and landing (VTVL) configurations. He patented a reusable plug nozzle rocket engine that had dual use as a heat shield for atmospheric reentry. In 1965 and 1967, he obtained two patents for a Recoverable Single Stage Spacecraft Booster. In 1969, he co-authored with Kenneth Gatland "Frontiers of Space," which was published in several languages. 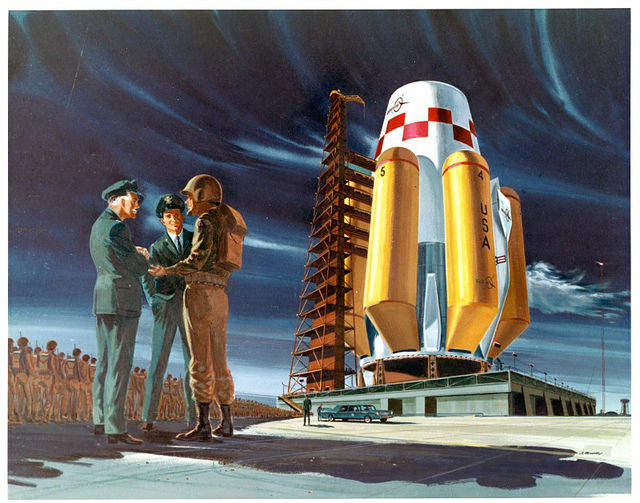 Less than three months after Bono's death, the first McDonnell Douglas launch vehicle based on his pioneering work on VTOL, a research test vehicle the DC-X (Delta Clipper), began a largely successful series of test flights.

Among his many awards and recognitions, the Council on International Nontheatrical Events recognized Mr. Bono for his motion picture, "The Role of the Reusable Booster." His ROMBUS design was featured in the "Flight to the Moon" attraction at Disneyland in Anaheim, California in 1967. He was granted Charter Membership in the International Astronautical Academy in 1960, and acknowledgment by the American Institute of Aeronautics and Astronautics in 1963, 1965, and 1966 through 1968. He achieved Fellowship in The British Interplanetary Society in 1961, and was elected a Fellow of the Royal Aeronautical Society in 1972.