Pacific Southwest Airlines (PSA) began operations on May 6, 1949 with a leased DC-3 that flew one weekly round trip from San Diego to Oakland via Burbank. Reservations were initially taken from a 6 foot by 12 foot war-surplus latrine that was refitted to serve as a ticket office. In 1951, PSA crossed the bay and began flying to San Francisco. In 1955, the airlines purchased two Douglas DC-4 aircraft from Capital Airlines and painted boxes around the windows to make the DC-4's resemble more advanced Douglas DC-6’s. During the 1960s, PSA operated Lockheed L-188 Electra aircraft on the San Diego-San Francisco route: these were replaced with Boeing 727 and Boeing 737 aircraft by the end of the decade. In the mid-1970s, PSA briefly operated Lockheed L-1011 aircraft before deeming them unprofitable and selling them off. PSA expanded its service to Sacramento, San Jose, Long Beach, and Ontario during this period and by 1980 was operating a hub at Los Angeles International Airport as well. 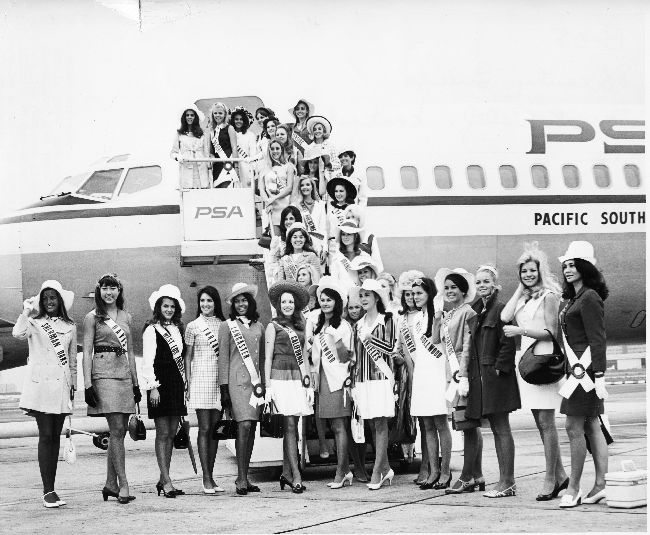 After airline deregulation, California’s major intrastate airlines (PSA, Air California, Western Airlines, and United Airlines) were engaged in intense fare wars. PSA attempted to extend its route network beyond California with flights to Reno, Las Vegas, Salt Lake City, and Phoenix. The airline also introduced automated ticketing and check-in machines at several major airports, and briefly operated flights to Mexico. When PSA's plan to buy out the assets of Dallas-based Braniff International fell through, the airline expanded its route network northward to Washington, Oregon, and Idaho. PSA used a new fleet of BAe 146 regional jets to serve smaller airports on the West Coast, such as Eureka, California and Concord, California. In 1986, both Western and Air Cal were purchased by out-of-state airlines (Delta Air Lines and American Airlines respectively). An hour after the Air Cal deal was announced, PSA agreed to a merger with USAir, which was completed in 1987. PSA's final flight took place on April 8, 1988. The PSA route network slowly disintegrated within USAir and was completely gone by 1994: most of the former airline's assets were scrapped or moved to USAir's hubs on the East Coast. PSA's operations base at San Diego International Airport was gutted and later served as that airport's commuter terminal. 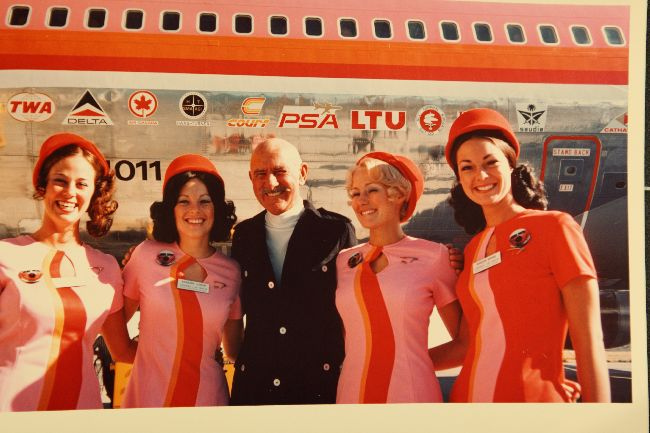 The corporate evolution of Pacific Southwest Airlines was complex. In 1946, Kenneth Friedkin, the man behind PSA, operated a flight school in San Diego. Through a series of mergers and acquisitions, in 1949, the small flight school became Friedkin Aeronautics, Inc., a California Corporation, and Kenneth Friedkin created PSA as its airline division. The other original principals were Victor C. Lundy and Douglas T. Kelley. PSA became a corporation on August 18, 1949. Starting up an intrastate airline was an expensive proposition, and there were many loans provided by banks and the three principals throughout their tenure. In addition, during the period 1951 through 1960, all of the aircraft in the PSA fleet were owned by the three principals via closely-held corporations (The Giles Company, Redford, Inc., and Lew Ellen, Inc.), and leased to Friedkin Aeronautics, Inc. for use by PSA.

These three corporations were wound up and dissolved on January 3, 1962. On March 17, 1962, Kenneth Friedkin died unexpectedly at age 47. His wife (Jean H. Friedkin) assumed his leadership role, along with their son, Thomas H. Friedkin, and the other original principals. Up until 1963, all of the corporate entities were closely-held corporations, but on February 11, 1963, the PSA directors and shareholders voted to place PSA shares on the public market. Unfortunately, the official corporate records in the SDASM archives end in early 1963, so there is no record of further corporate changes.

Link to the collection finding guide.