Major Oscar Perdomo flew a P-47 Thunderbolt with the 464th fighter squadron, 507th fighter Group USAAF in the Pacific Theater, where he became the last “Ace in a Day” of WWII.

Major Oscar Francis Perdomo was the son of Mexican immigrants, born on June 14, 1919 in El Paso, Texas. Five years after his birth, his family moved to California to the city of Los Angeles. After Perdomo received the required education, in February 1943, Perdomo entered the Army Air Forces (AAF) as an aviation cadet. He underwent training in Phoenix, Arizona, and Minter Field, California. After he graduated from flight school January 7, 1944, and briefly became one of the school’s instructors. Soon after, he requested to be sent into overseas service in World War II. At the Army Air Forces Basic Flight School atChico, California, he underwent further training as a RepublicP-47 Thunderboltpilot. While on a sweep mission over Kyushu, Japan in 1945, in service with the 507th Fighter Group, he shot down five enemy planes in his Republic P-47 Thunderbolt, “Li’l Meatie’s Meat Chopper” (serial 44-88211), to become the last ace of World War II. 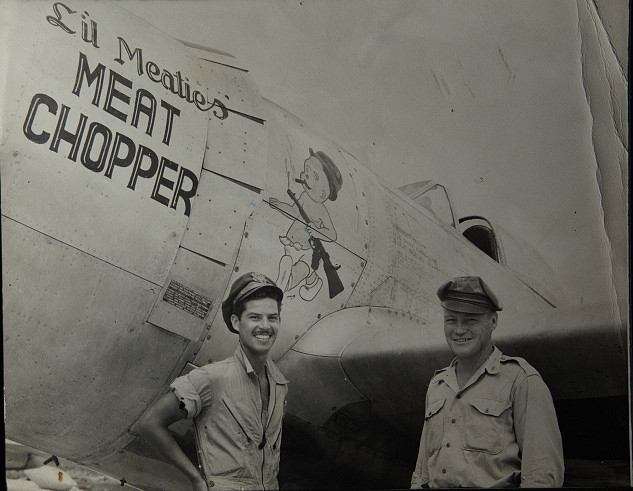 After the war, he joined the Reserve and was recalled to active duty during the Korean War. He left military service in 1958 with the rank of Major. He passed away tragically on March 2, 1976. Among his decorations and awards were the Distinguished Service Cross, Silver Star, and Air Medal.