Norman Howard Casson has spent his technical career of six decades in aerospace. Though Casson was employed as a launch test conductor for the Titan I Intercontinental Ballistic Missile, and later the Titan II – and received many honors for his work there – he is best known for his contributions to the United States lunar landing program, “The Apollo Project.”

NASA trusted Casson with the responsibility to thoroughly test and checkout every NASA manned spacecraft and take it through testing, and mission rehearsal with the actual astronaut crew members. After proving himself capable of managing Station C of the state-of-the-art Building 290 (constructed specifically for these operations), he was eventually given the responsibility of managing all Technicians, the Test Procedure Writing engineers, four control rooms, tank farm fluid and cas facilities, the systems engineers, the senior engineering test project managers, as well as all clerical and operations support personnel and the Apollo Post Recover operation and budget. This last was a team of engineers and technicians required to travel to the “splashdown” area of all Apollo Spacecraft returning from space, to save the systems and take steps to prevent hostile contamination from the surface of the moon.

Casson was immensely successful. He completely restructured the organization into what he believed was a “lean and agile” machine. He set up systems to assure the engineers working on the project were up-to-date with certification and qualifications as well. 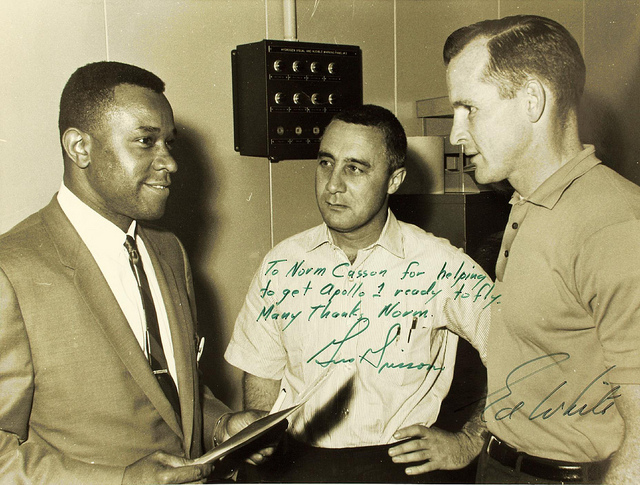 Casson worked on the Apollo Missions for NASA as an engineer as well. He has a wealth of information on the American Space program. Casson lives in Arkansas and visits the Library & Archives when he is in the San Diego Area. He has donated personal papers and pictures about the Apollo Mission and his time working for NASA to the Library and Archives.