The Soviet Mig-17 design began in 1949, was first flown in 1950 and entered production at the end of 1951. The early Mig-17 models were used as day fighters; they had no afterburners, no radar and small airbrakes. Later, as their mission was extended to night fighting, modifications were made, and the plane acquired afterburners and radar. The Mig-17 became standard equipment for Warsaw Pact countries, and was used in air forces of countries aided by the Soviet Union. The aircraft was also licensed for manufacture in China and Poland. Production peaked at 300 per month, making it one of the most widely produced Soviet fighters, with a total of approximately 8,000 aircraft built.

In Vietnam, the Mig-17 served primarily as a day fighter, with limited all-weather and night capabilities, and being lighter than most American fighters, it could make tighter turns than the American jets. Early air combat engagements against the Mig-17 highlighted the need for improved tactics. To remedy disappointing combat performance against smaller, more agile fighters like the Mig, the Navy and Air Force established air combat training programs, such as the one seen in the movie Top Gun. Along with the U.S. Navy Top Gun program, the U.S. Air Force established the Red Flag air tactics training program. In these schools, American pilots could simulate combat against Mig aircraft and develop tactics to defeat them. It worked, and U.S. pilots soon dominated the skies over Vietnam.

The Mig-17 on display at the Museum is believed to have been built in Poland. It first served in the East German Air Force, was then transferred to the Egyptian Air Force, where it was modified for a ground attack role. It was retired by the Egyptians in the late 1970s or early 1980s and purchased by the Museum in March 1986. The Mig-17 is on permanent exhibit in the Pavilion of Flight after restoration at Gillespie Field. Its paint scheme represents the North Vietnamese Air Force, circa 1972. 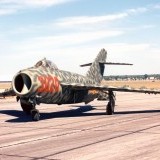 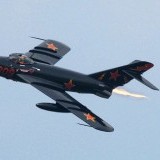 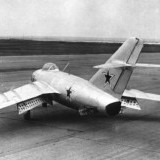