On Nov. 11, 1935, Captain Albert W. Stevens and Captain Orvil A. Anderson broke the world altitude record when they reached 72,395 feet above the earth in the Explorer II balloon. Launched at 8:00 AM from the Stratobowl in South Dakota with a crowd of nearly 20,000 watching, the helium balloon reached a peak altitude at 12:30 PM and remained there for 80 minutes.This set a new world altitude record, one that would last for nearly two decades. The crew became the first humans to witness the curvature of the Earth. Explorer II carried instruments that collected data for studies in cosmic ray research, the ozone layer, aeronomy, meteorology, biology, and radio propagation in the high atmosphere. The success of the mission was greatly celebrated by the press and both men were hailed as National heroes, presented many medals and granted an audience with President Franklin D. Roosevelt.

Though quite faded, the SDASM Archives holds not just one, but several unique artifacts related to this historic flight. The first is a piece of fabric from the Explorer balloon itself, signed by Captain Albert W. Stevens, who was in command of the mission. The fabric is signed and dated to “Lt. Harold W. Bowman,” who worked for the Army Air Corps, a joint sponsor along with the National Geographic Society of the Explorer II project. 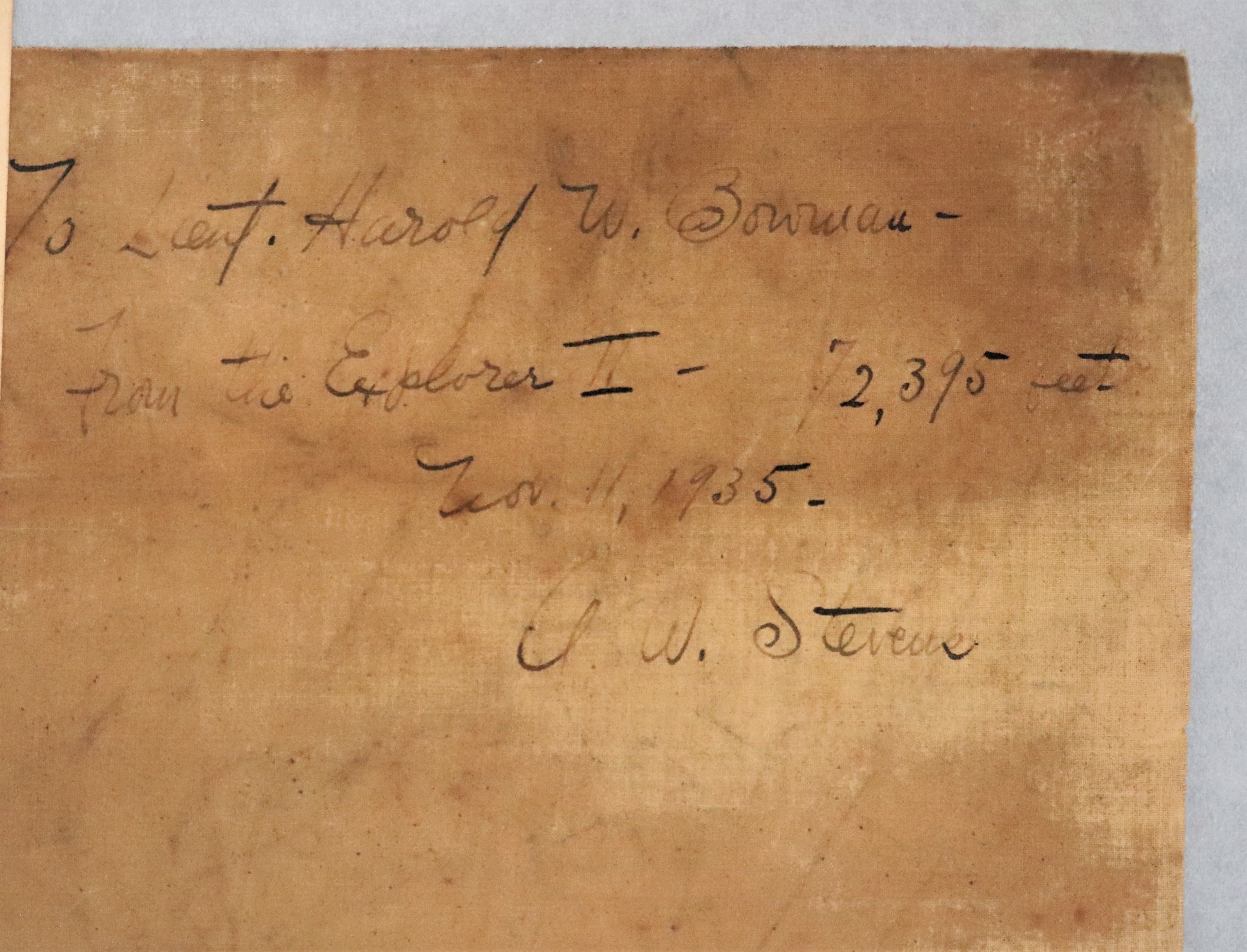 The balloon used for the Explorer II expedition was cut up into a million strips and distributed as commemorative bookmarks among the National Geographic Society members who helped financially support the mission. 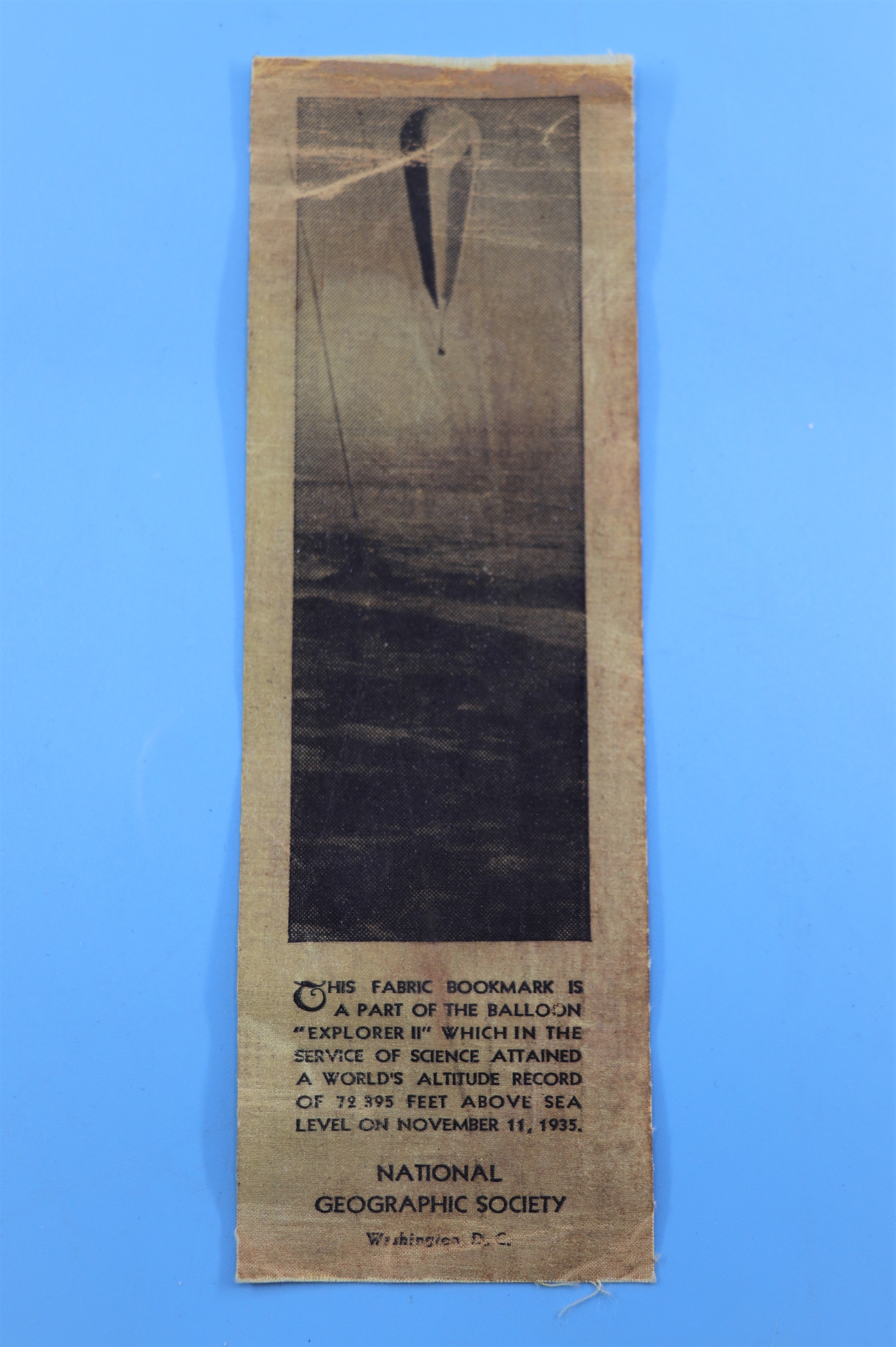 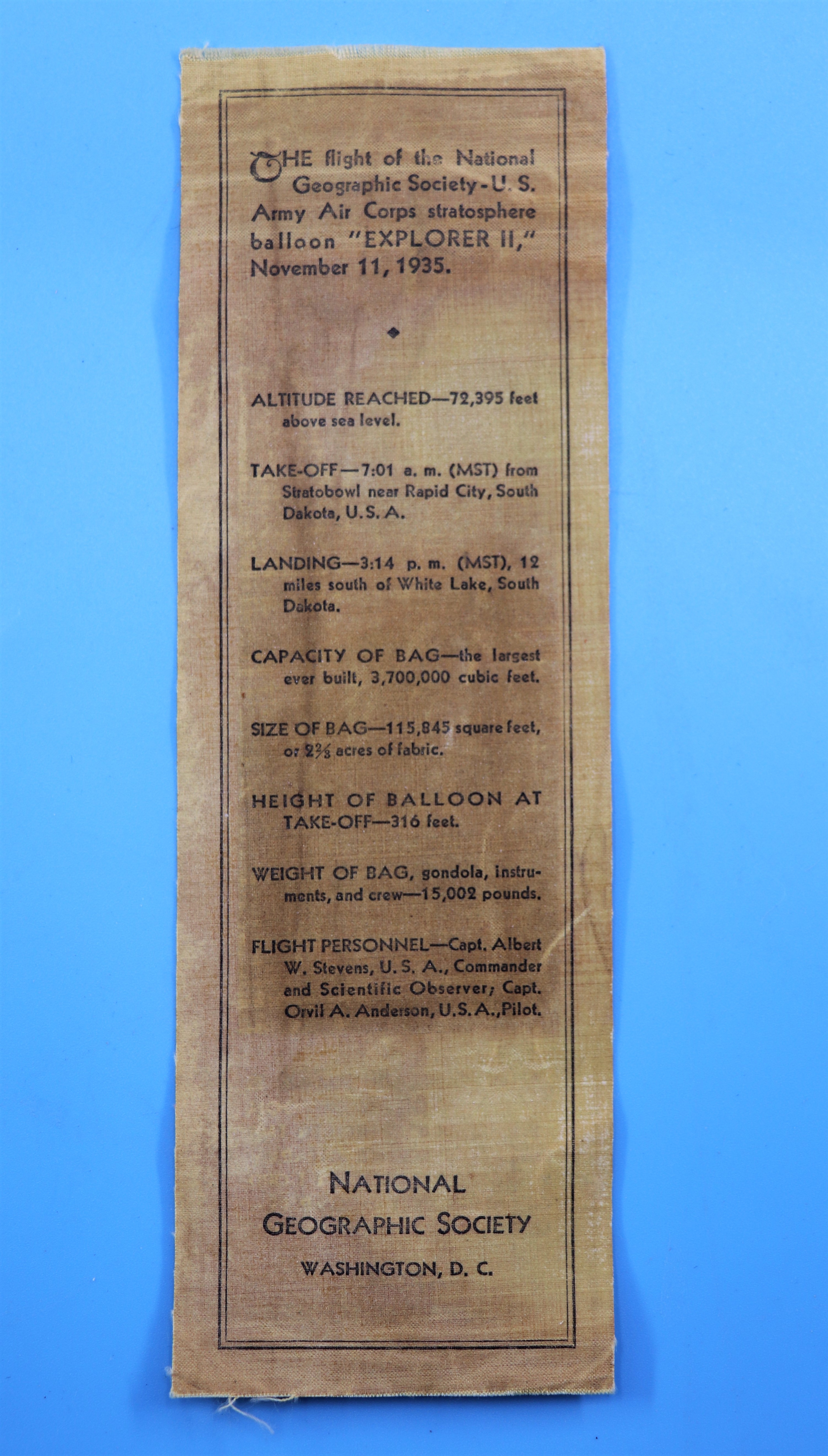 So while there are many pieces of fabric from the balloon, very few are signed. However, what makes this piece even more unique is that sewn on to the bottom of the fabric is another piece of fabric, this is from the Gwiazda Polski (The Star of Poland) balloon, an attempt by Polish planners in October of 1938 to beat the high-altitude world record. Captain Stevens provided technical assistance and travelled to Poland for the flight. Though this attempt was ultimately an utter failure, with the balloon catching fire less than 100 feet from the ground, it was one of the last attempts to fly into the stratosphere for many years with World War II looming on the horizon. 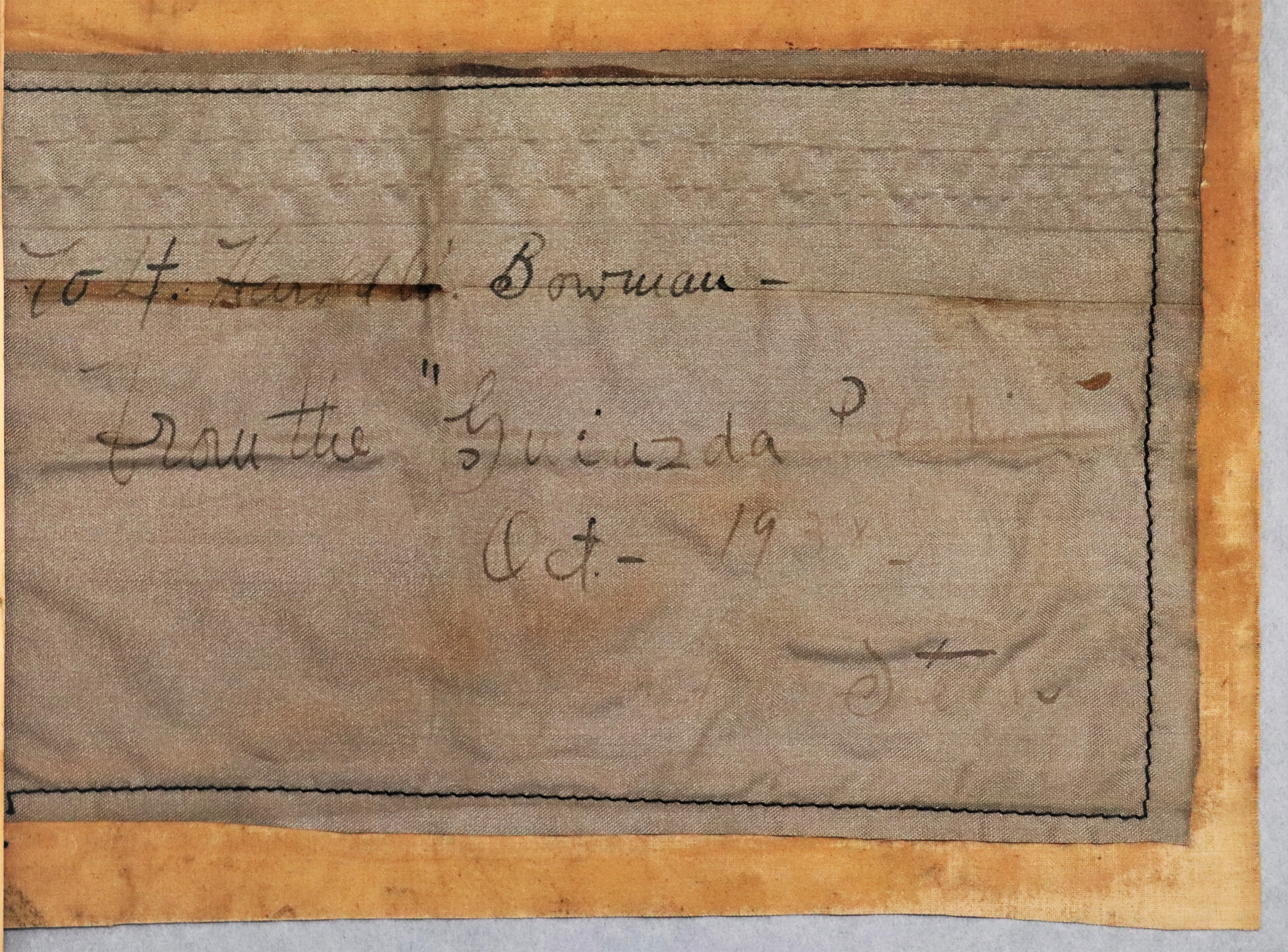 This fabric is also signed and dated to Lt. Harold W. Bowman. Additionally, there is a letter, written by Bowman to a friend, which details the fabrics and how he obtained these artifacts. These three pieces offer a one of a kind perspective into the mission which became a milestone for aviation and paved the way for future space travel and the notion of manned space flight. 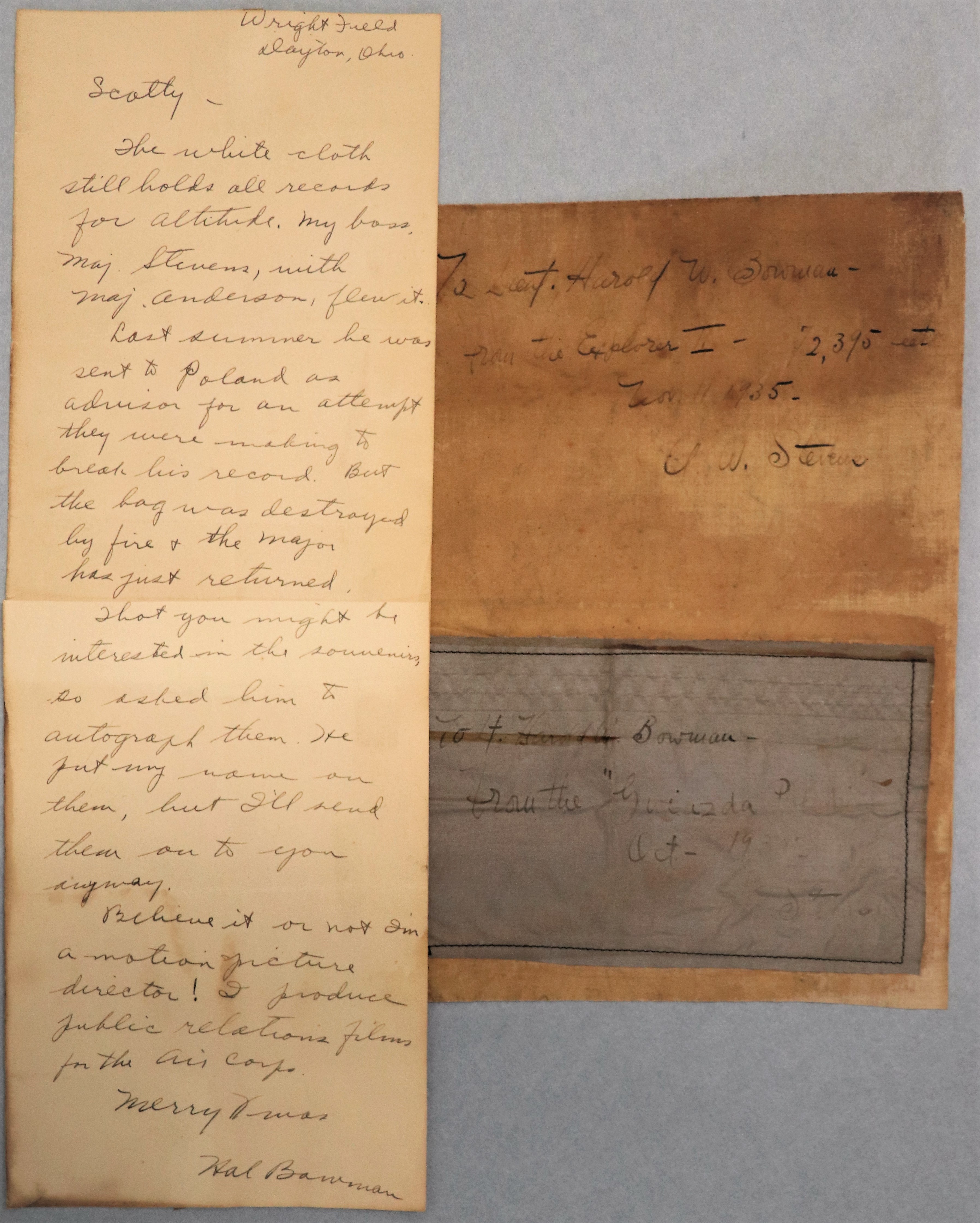 Of special note, the original Explorer II balloon and equipment were displayed in the Museum’s current facility (historic Ford building) in 1936 for the California Pacific International Exposition. A mural complimenting this exhibit was painted by Juan Larrinaga adjacent to the display and still remains today, restored in 1979. 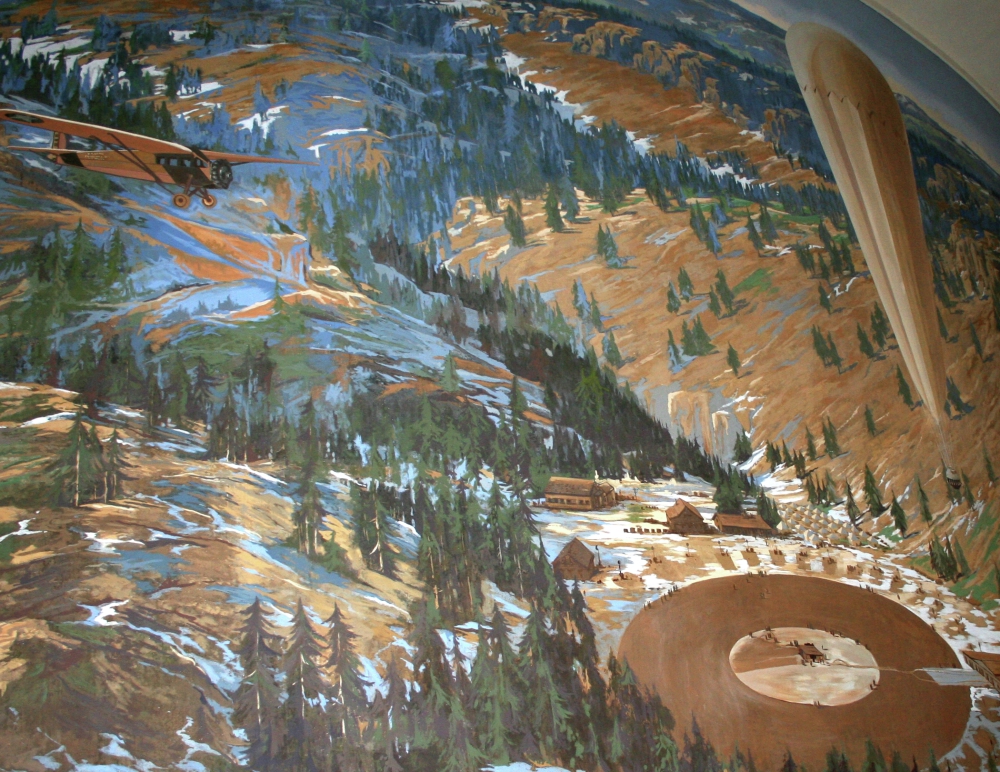 Here are more artifacts from our Curatorial collection.