On August 8, 1927, 15 aircraft drew starting positions for the Dole Air Race from Oakland, California to Honolulu, Hawaii. By August 19, five aircraft were no longer competing, five crashed, three disappeared, and ten participants were dead. This is the story of the Dole Air Race. 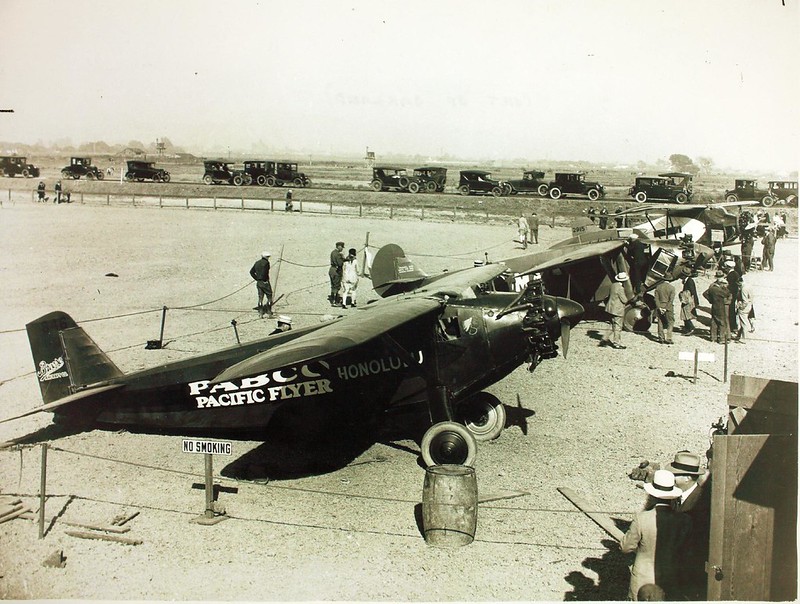 James D. Dole offered $25,000, almost $420,000 in 2022, to the first fixed-wing aircraft to fly from Oakland to Honolulu. The race was scheduled to begin on August 12. However, mechanical issues, environmental delays, and disqualifications postponed the start of the race. For instance, when George W.D. Covell and R.S. Waggener left San Diego for Oakland, they encountered a fog bank and fatally crashed into an ocean cliff at Point Loma. A fragment of their Tremaine Humming Bird, Spirit of John Rodgers, is currently at the Museum, as seen below. 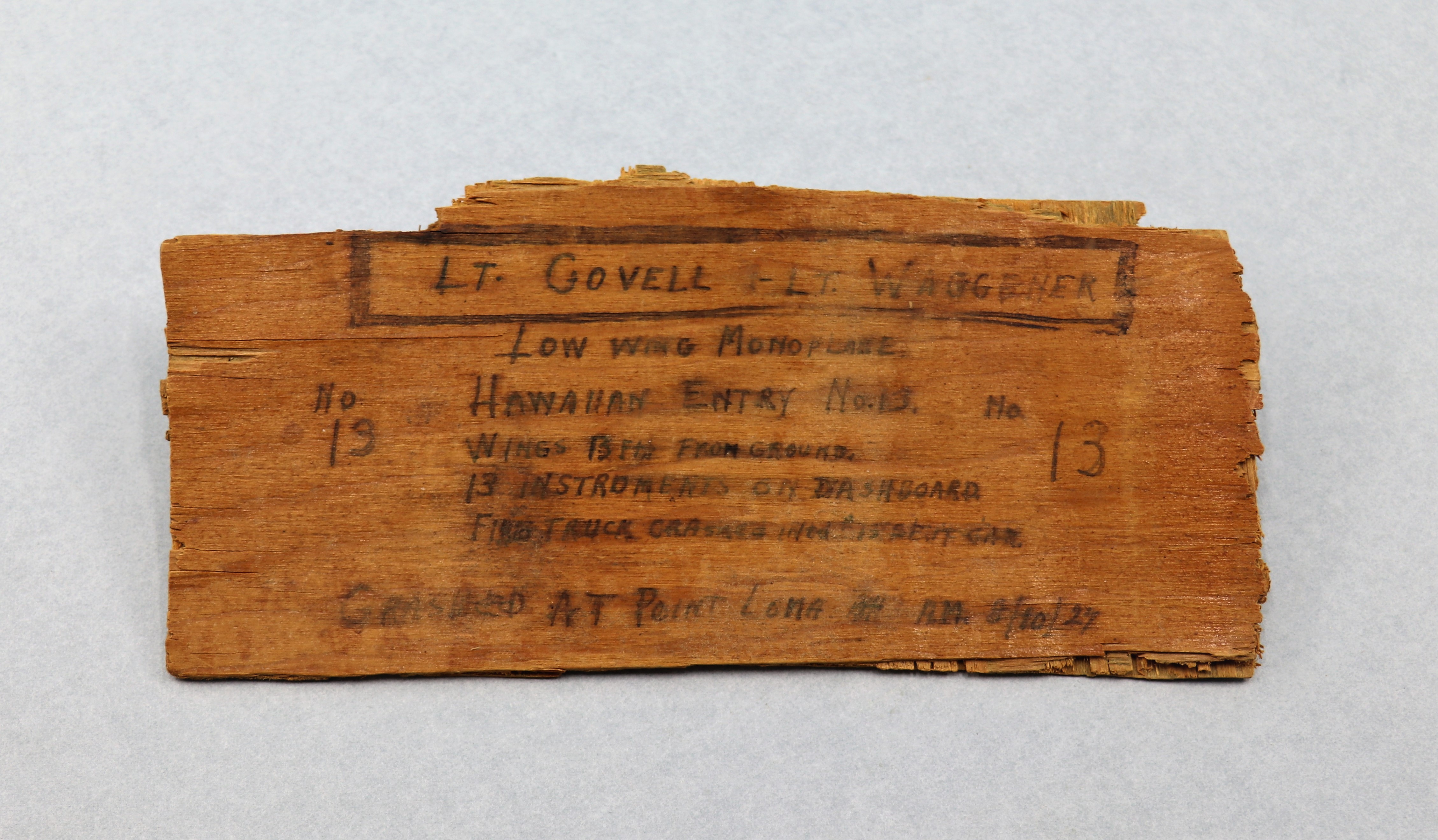 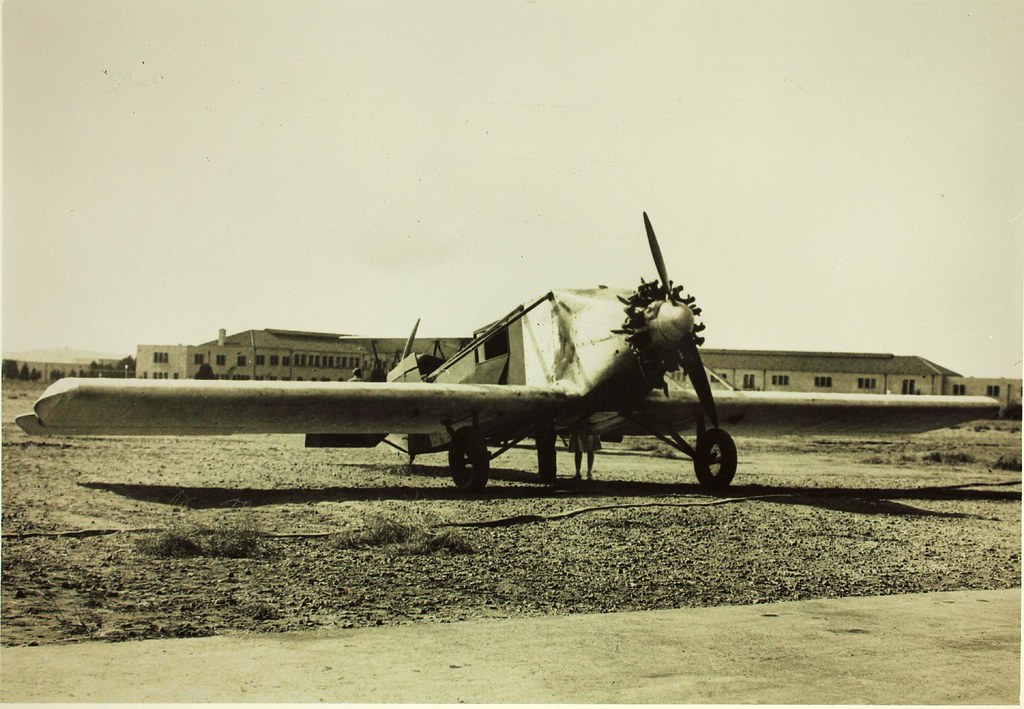 The Tremaine Humming Bird prior to the start of the Dole Race. 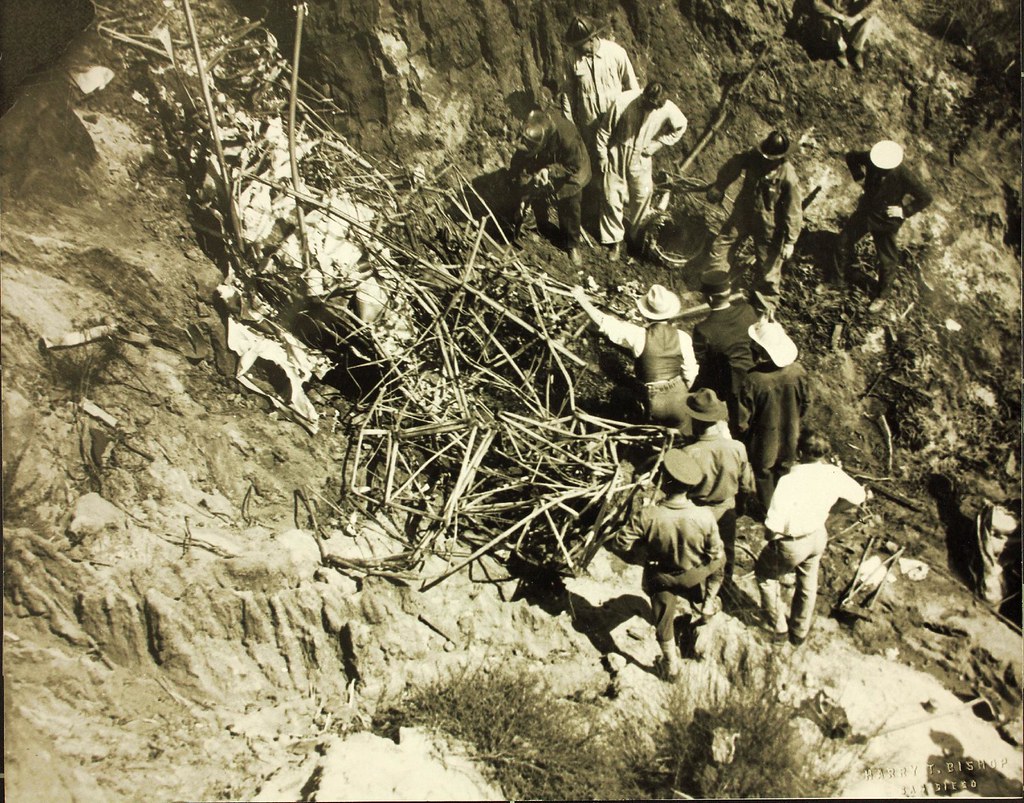 The wreckage of the Tremaine Humming Bird at Point Loma.

Eight aircraft were prepared and qualified to start the race at 12pm on August 16. Jack Frost and Gordon Scott departed in their Lockheed Vega 1 monoplane, Golden Eagle. Martin Jensen and Paul Schluter left in their Breese-Wilde 5 monoplane, Aloha. Arthur C. Goebel and William V. Davis took off in their Travel Air 5000, Woolaroc. However, Norman A. Goddard and Kenneth C. Hawkins crashed on the runway before they could take off in their Goddard Special metal monoplane, El Encanto. Livingston Gilson Irving managed to rise his Breese-Wilde monoplane, Pabco Pacific Flyer, off the runway before crashing; he made a second attempt, but crashed again. Meanwhile, Bennett Griffin and Al Henley returned to Oakland less than an hour after departing when their Travel Air 5000, Oklahoma, began overheating above San Francisco. Auggy Pedlar, Vilas R. Knope, and Mildred Doran also returned when their Buhl CA-5 Air Sedan, Miss Doran, experienced engine trouble; they took off a couple hours later without issue. William Portwood Erwin and Alvin Eichwaldt returned as well when they discovered their Swallow monoplane, Dallas Spirit, had tail gear problems. 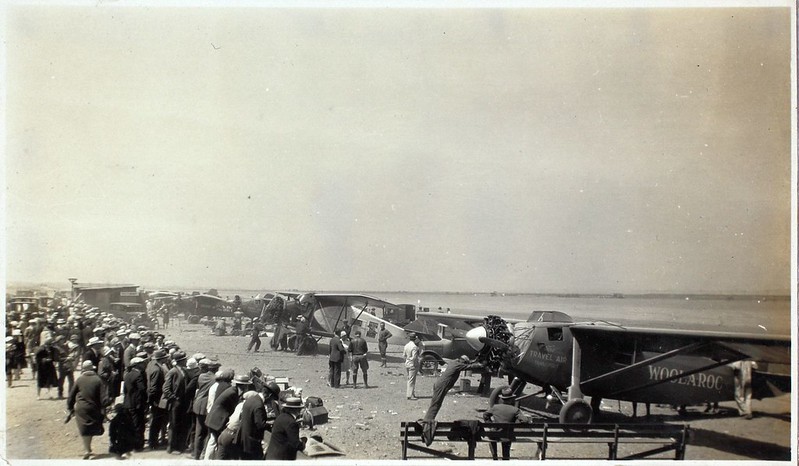 After 26 hours and 17 minutes of flight, Woolaroc arrived in Hawaii with Goebel and Davis claiming the cash prize. Two hours later, Aloha arrived with Jensen and Schluter claiming the second place prize of $10,000, or $168,000 in 2022. Unfortunately, the other participants never made it to Hawaii. Golden Eagle was last seen halfway to its destination. Miss Doran was last seen passing Farallon Islands about 40 minutes after its second departure. Dole offered a $10,000 reward matched by the air race sponsors to anyone who found either of the missing aircraft. The search included the air race winners, three submarines, and over 50 ships. Dallas Spirit joined the search on August 19 after repairs to the tail gear. Six hours and 40 minutes into their search, Erwin and Eichwaldt reported tail spinning over the ocean and subsequently disappeared. 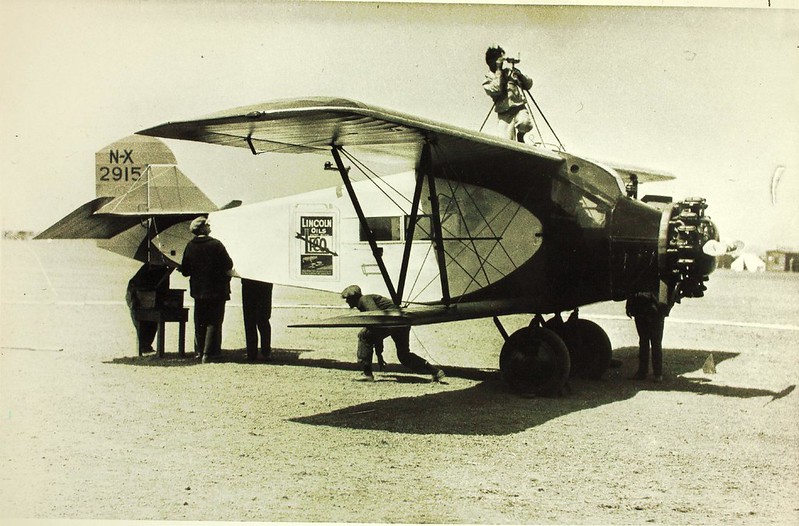 Buhl Air Sedan "Miss Doran" NX2915 before the start of the race.

In the following years, aircraft debris, lifejackets, body parts, and messages in bottles have been discovered, but none of these have ever been definitively connected to the Dole Air Race. 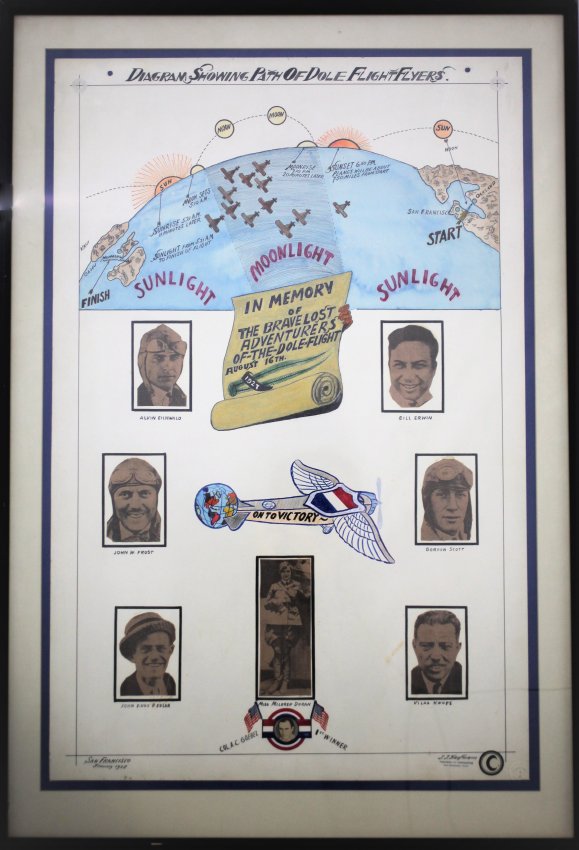 Artist J.J. Kaufmann created the painting seen above in memory of the missing participants one year after the air race.

More images from the Dole Air Race can be found here.

Footage of the Dole Air Race from our Archives: