The AH-1 Cobra or Huey Cobra was the first helicopter to be produced specifically as an attack aircraft for the U.S. Army. The Bell UH-1 Huey utility helicopter was used in the Vietnam conflict for only a few years before heavily armed escort and light attack versions were needed.

At first, they modified the Huey by adding guns and rockets to the existing airframe. However, the limitations of early armed helicopter conversions, particularly their vulnerability to enemy fire, necessitated a redesign of the helicopter airframe. The Huey utility helicopter was redesigned with a thin, low-profile, streamlined airframe which provided better crew protection and payload capability while increasing its speed. This new design became the AH-1 Cobra.

The two-blade rotor system of the Cobra had a distinctive “popping sound” which was comforting to friends—and potentially terrifying to enemies.

The Cobra is a stable weapons platform, particularly for guided anti-tank missiles. Versions of the Cobra are still in use by the U.S. Marine Corps. The Museum’s late-model AH-1E Cobra is an enhanced version of the AH-1S Cobra built in 1977 and delivered to the Army in 1978. It saw action in Grenada during Operation Urgent Fury in 1983, and last served with the 7th Light Infantry Division based out of Fort Ord, California. The U.S. Army donated the helicopter to the Museum in 1993.

It is displayed in the Pavilion of Flight with rockets, Tow anti-tank missiles and a three-barreled 20mm Vulcan cannon. This armament was typical for the Cobra’s primary mission: to attack enemy tanks and combat vehicles in support of ground forces. 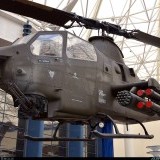 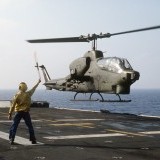