Allan Francis Bonnalie was born September 29, 1893, in Denver, Colorado. His parents later moved to San Francisco, California, where he completed his schooling.

During this period, he became interested in the new science of flight, and while in high school became a member of the newly formed Polytechnic High School Aero Club. It consisted of about ten members, and together they built a biplane glider having a Farman-type box tail, undercarriage, ailerons and elevator, but no rudder. Control surfaces were not very effective, so shifting of the operator’s body was also necessary in flight. When completed, the club glider was taken to the Twin Peaks vicinity of San Francisco where a suitable hill was available for flying experiments. Bonnalie made his first flight there on November 1, 1911.

The club then decided to build a powered plane. Following Curtiss design features, they were assisted by a local Japanese reserve military officer, S. Doi, who owned a curio shop on Van Ness Avenue. A 2-cylinder opposed air-cooled 25-30 HP Detroit aero motor was installed. Bonnalie made the first flight tests of the plane but being both overweight and underpowered, it was capable of only limited straightaway hops. When the plane was completed, Doi packed it up and shipped it to Japan where it became one of the first planes in that country.

Following this, Bonnalie obtained additional flying experience in a locally owned Farman-type plane powered by a Ford automobile engine. Prior to World War I, Bonnalie worked with a partner in the design and building of five airplanes, including a flying boat.

In 1916, Bonnalie worked for the Gorham Engineering Company. In April 1917, he made application for enlistment in the Aviation Section, Signal Corps, U.S. Army but was rejected due to being underweight. Later, he was accepted to the School of Military Aeronautics, University of California at Berkeley, where Waldo Waterman taught an 8-week course, among others. 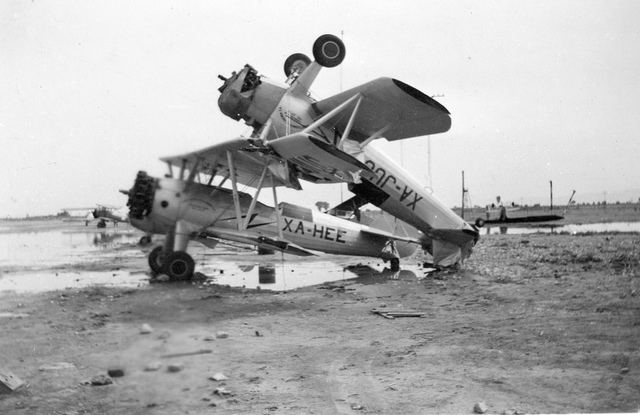 On completion of the course, he joined ground school graduates from other schools and, on August 13, 1917, they sailed from New York for overseas assignment, arriving in Liverpool. The group was sent to Oxford University for further training. In May 1918, Bonnalie was assigned to the 211thSquadron, Royal Air Force. While with the RAF, the British awarded him with the Distinguished Service Order, the highest decoration presented to an American officer at the time. He was also awarded the U.S. Army Distinguished Service Cross.

After the Armistice, Bonnalie was attached to the staff of the 2ndArmy Air Service under Col. Frank P. Lahm and Col. John F. Curry. This unit provided courier service to Coblenz, Germany, occupied by U.S. troops. This assignment included considerable training in navigational and instrument flying.

In May 1919, Bonnalie returned to the United States, resigned his commission as First Lieutenant and resumed civilian life. He went into mechanical engineering work, spending about eight years at Southern Pacific Railroad in San Francisco. In 1925, he joined the Naval Reserves as a Lieutenant, and commanded Reserve Squadrons until the beginning of World War II.

By the time of Pearl Harbor, Bonnalie had advanced in the Naval Reserves to Lieutenant Commander, Production Division, Bureau of Aeronautics, Navy Department, Washington, D.C. He retired in 1953 as a Rear Admiral USNR.

While with the railroad, Bonnalie encouraged them to bid on a Government airmail contract from San Francisco to Chicago. However, his effort was turned down and Boeing Air Transport was the successful bidder. Still interested, he joined Boeing in 1929. Shortly after he joined Boeing, it became United Air Lines and he assisted in their training program and also became Assistant Head of their flight department. He was later promoted to President and General Manager of United in Mexico, known as LAMSA. Bonnalie retired from United Air Lines in 1958.

Allan Bonnalie held Commercial Pilot Certificate No. 30819 Aircraft Class I, was a member of the Early Birds, and an Associate Fellow of the Institute of Aeronautical Sciences. He passed away at age 89 on January 29, 1983.