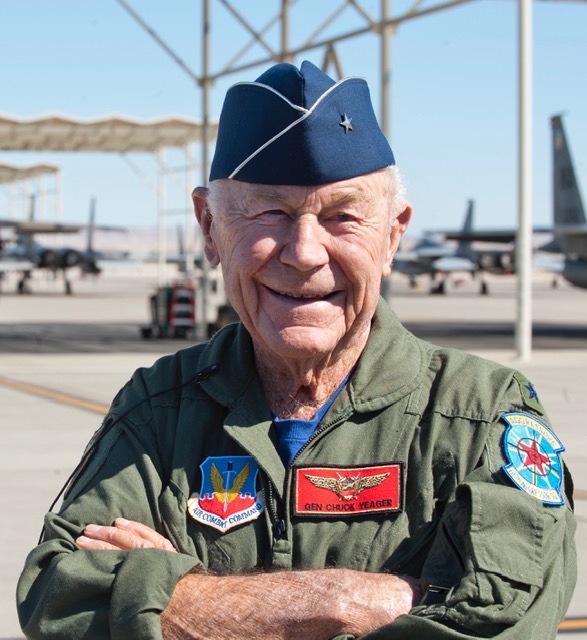 The San Diego Air & Space Museum is mourning the loss of Chuck Yeager, the first man to break the sound barrier in level flight in the Bell X-1. The Museum has a replica of Yeager’s Bell X-1 in its Rotunda as part of its Milestones of Flight Exhibit. Yeager passed away on Dec. 7, 2020 at the age of 97. Yeager was inducted into the International Air & Space Hall of Fame at the San Diego Air & Space Museum as part of just the second class of honorees in 1966.

Charles Edward Yeager enlisted in the U.S. Army Air Forces in 1941 and received his pilot's wings in 1943. Assigned to the 357th Fighter Group, Eighth Air Force in England, "Chuck" Yeager's skill and aggressiveness soon made him a leading "Ace" with 13 victories, 5 of which were achieved on a single mission. On March 5th 1944 he was shot down over enemy territory but evaded capture escaping to safety through Spain.

In July 1945, assigned to the Army Air Forces Flight Test Center at Wright Field, Ohio, he began a long and distinguished career as the nation's most outstanding experimental test pilot. In October 1947, at Edwards Air Force Base, Yeager became the first to break the sound barrier, piloting an aircraft faster than the speed of sound in the Bell X-1.

In 1952, he set a new airspeed record of 1650 miles per hour. After graduation from the Air Staff College in October 1954, he returned to tactical flying as a Squadron Commander in Germany. In 1961 he was designated Commander of the Air Force Test Pilot School at Edwards AFB, and in July 1966, assumed command of the 405th Fighter Wing, flying 127 combat missions in South Vietnam.

He closed his distinguished military career as Director of Aerospace Safety for the Air Force, retiring from active duty February 29th 1975. Yeager made his last flight as a military consultant on October 14th 1997, the 50th anniversary of his history-making flight in the X-1. He observed the occasion by once again breaking the sound barrier, this time in an F-15 fighter. He retired from flying active military aircraft in 2002.

In addition to his many decorations for valor he has been honored with the Collier, Mackay, and Harmon International Trophies, as well as many other awards, for his contributions to the advance of aero science.