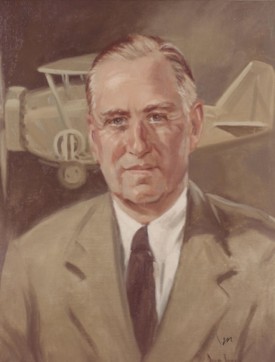 Leroy Randle Grumman received a degree in mechanical engineering from Cornell University in 1916. He enlisted in the Naval Reserve and took advanced flight training in Pensacola, Florida, becaming a flight instructor after his training. Later Grumman was sent to the Massachusetts Institute of Technology to study the brand-new discipline of aeronautical engineering. From 1920 until he left to form his own company in 1930, he served as General Manager of the Loening Aeronautical Corporation. The Grumman Aeronautical Engineering Company began operations at Bethpage, New York, repairing Loening amphibians, building aluminum pontoons, and producing aluminum truck bodies while designing aircraft until receiving its first Navy production contract for a two-seater biplane. With retractable landing gear and enclosed cockpits, the F-3-F biplane fighter produced for the U.S. Navy presented a new concept for naval aviation, estab- lishing an association with the Navy which has endured through the years. Grumman developed an advanced naval fighter with the first practical folding wing mechanism, the F-4 Wildcat, thereby permitting the stowage of greater numbers of planes on aircraft carriers. This rugged aircraft was the backbone of the Navy and Marine Corp fighters until the introduction of the fabled F-6-F Hellcat in 1942. The TBF Avenger torpedo bomber also played a major role in the naval campaigns of the Pacific theater. Grumman's company produced 31,376 aircraft during the war, dominating U.S. Naval Aviation Forces and responsible for two-thirds of all Japanese aircraft destroyed. In the post war years his genius produced the F-7-F Tigercat twin engine naval fighter; the F-8-F Bearcat fighter; the F-9-F Panther, the Navy's first combat jet fighter; and the SA-16 Albatross amphibian, widely used throughout the world for search and rescue operations. All of these aircraft saw service during the Korean War from 1950 to 1952. Although he stepped down as president of his company in 1946, he remained active as its Chairman of the Board until 1966.
Inducted in 1973.
Portrait Location: World War II Gallery