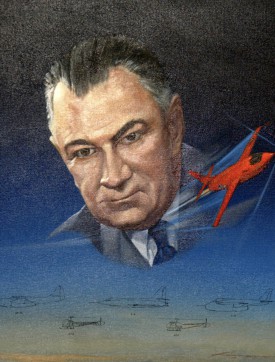 Larry Bell attended school in Mentone until 1907 when his family moved to Santa Monica, California. In 1912, a month before Larry was to graduate from Santa Monica Polytechnic, he joined with great stunt pilot Lincoln Beachey as a mechanic. Larry then went to work for the Glenn L. Martin Aircraft Company, where, by age 20, he was shop foreman. Within a few years he became vice president and general manager of the Martin Company. In 1928, he joined Consolidated Aircraft in Buffalo, New York, as general manager. In 1935, Larry Bell formed the Bell Aircraft Corporation that designed and produced a number of innovative military aircraft. Bell's outstanding success is attributed to the many firsts that he achieved. In 1942 he produced the first U.S. jet-powered fighter aircraft, and his continued innovative design projects include the high-speed research aircraft X-1, which became the first aircraft to fly faster than the speed of sound in 1947. The Bell Model 47, which initially flew in December 1945, was the first commercial helicopter to achieve U.S. approval. Bell also produced the first vertical take-off and landing jet airplane. Since then, thousands of Bell helicopters have been produced for civil and military operations throughout the world. During his career, Larry Bell has been honored with the Daniel Guggenheim Medal (1944), the Collier trophy (1948), the French Legion of Honor (1950), a presidential citation, and honorary degrees, in addition to having many schools and parks named after him.
Inducted in 2004.
Portrait Location: World War II Gallery